Art of Conquest has experienced over the past couple of years in our updated game review. There, we promised to come back with more information on the current balance between races in AoC and we mean to deliver. 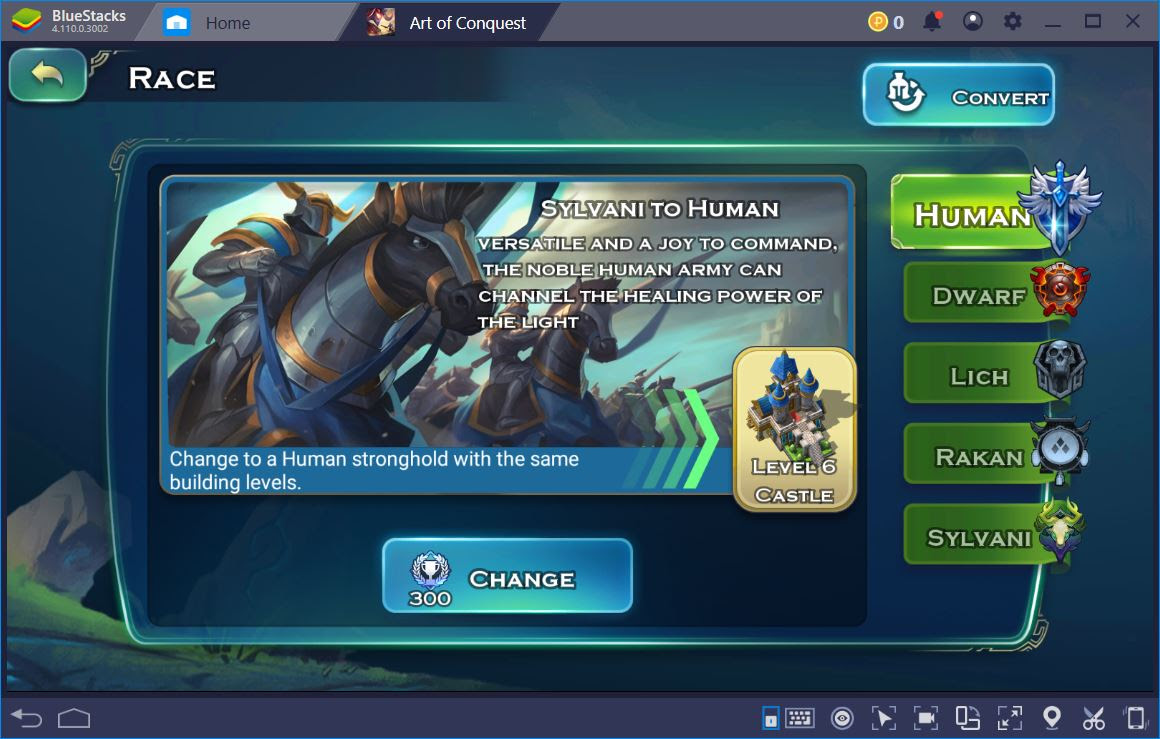 We also want to give you a crash course on leveling your heroes as fast as possible, since they are crucial to every army composition nowadays. Fortunately, both aspects of the game are thoroughly approachable by all players, free and pay to play alike; although the former will find the task to be somewhat grind-heavy.

First and foremost, you should rush to get Elena at all costs. It will take some time to open all those chests, but we guarantee she is well worth the effort. Aside from being an extraordinary commander due to her Strategic Retreat and Magic Resistance, she will also be the fastest hero you grow to the max level. 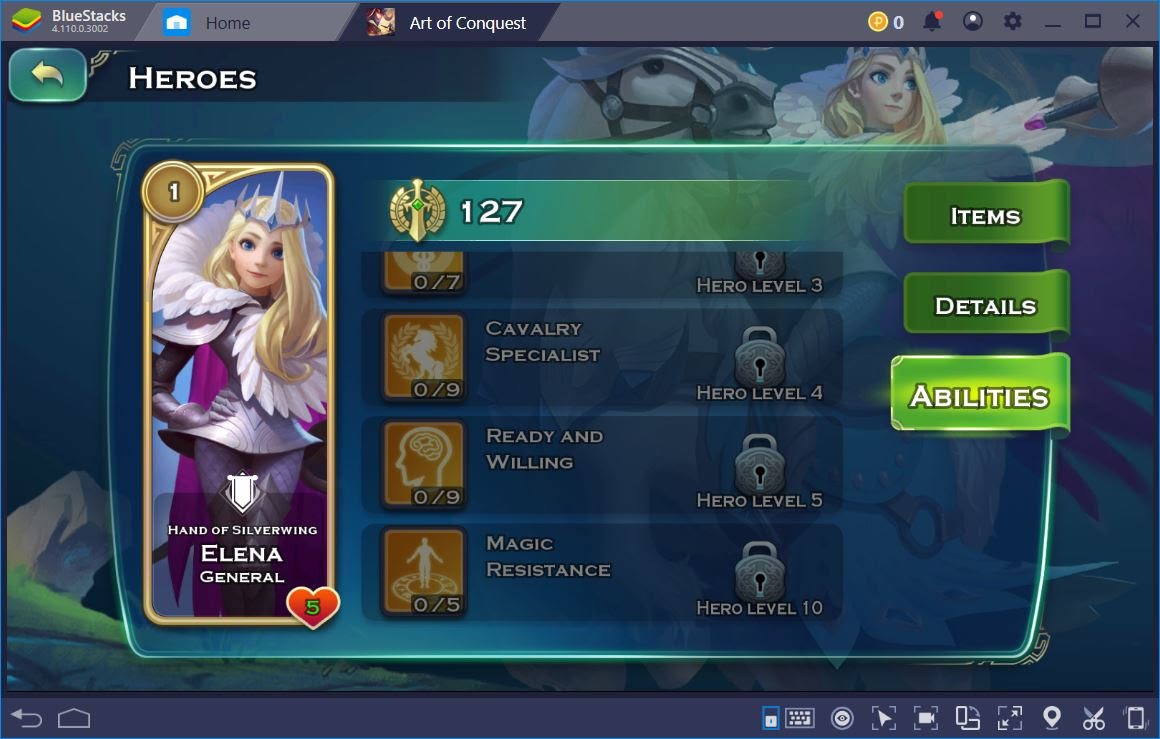 The reason for this is her Ready and Willing passive, which greatly increases the amount of experience she gains. You’ll want to have at least one Hero Set where you max RW to profit from this mechanic. If it’s not a critical confrontation you’re looking to brave, then switch over to this build and have her grow as fast as possible. At level 9, she’ll get a full 120% more experience from all sources.

Also, whenever you use an exp card, its value will be significantly increased by her passive ability. Since she’ll be a bit weaker with maxed out RW, make sure to also level Magic Resistance in the same spec. This will enable you to go for world events that give out bonus resources and experience and have her level outstandingly fast without even using cards. 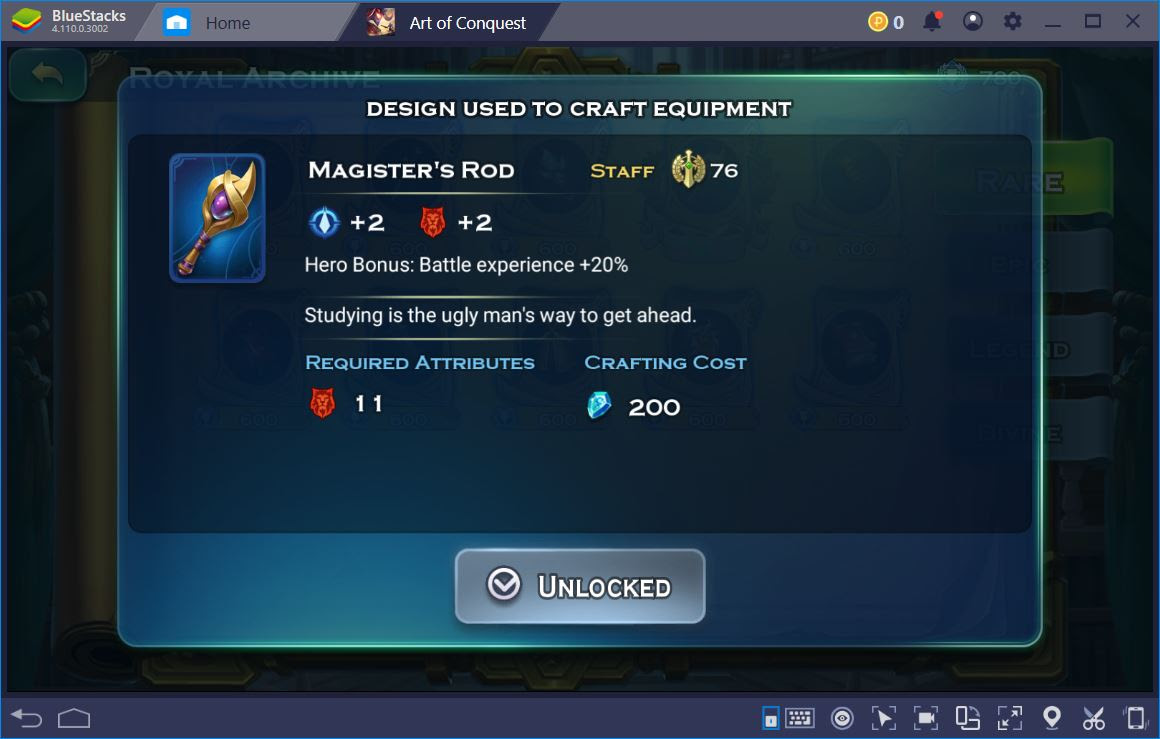 If you’re working with a Mage or Sage, like Vega, Vallari, or Gan, there’s an item you can craft that will boost their progression: the Magister’s Rod. It’s not as effective as Elena’s passive, but its impact is big enough to be worth the bother. You can get the blueprint for it at any point, from the Royal Archive, although crafting it won’t be possible very early on.

Even though the item says it only enhances battle experience, it seems that the Rod also works on cards. So, if there’s a particular hero you’re looking to level, this will get you more bang for your buck, so to speak. 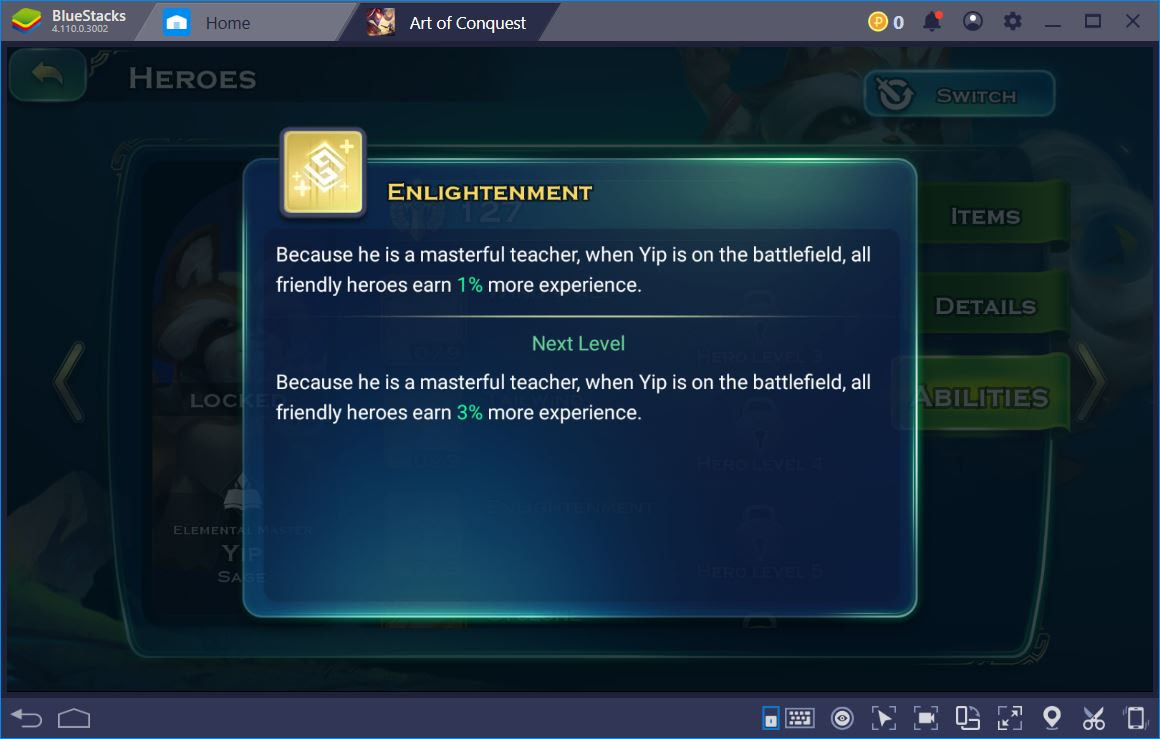 Play Art of Conquest on BlueStacks!

Lastly, Yip can be just as impactful as Elena when you’re levelling a core group of heroes. His Enlightenment skill is, in fact, similar to Elena’s passive. However, instead of improving his own experience gain by a lot, this ability will increase all friendly heroes’ experience gain when he joins them on the battlefield. At level 9, Yip will give everyone 30% more experience, which, if you think about it, can actually increase the growth of your core group of units by a lot.

At this point, the devs from Lilith Games have managed to balance out the 5 races quite neatly. You can play your favorite stronghold and still be decent in all aspects of the game. Of course, each has their own advantages and disadvantages, but it’s nice to know that you can, for once, follow your heart. For example, we immediately switched to Sylvan as soon as we could, despite the fact that it’s not really recommended to do so at this point in the game. 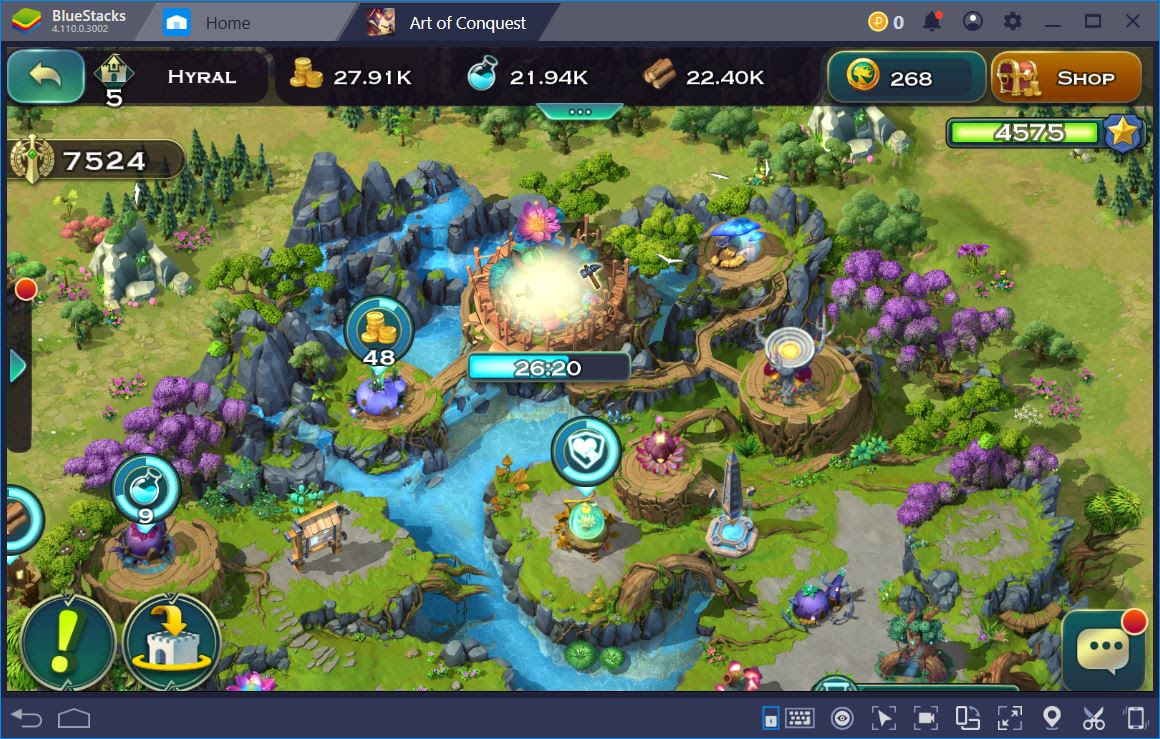 To help you make your decision, here’s the skinny on each faction:

Your starter race. Their upper-hand is their versatility, so if you know who or what you’re up against, there’s a good chance you can prepare your battlefield in a way that gives you the advantage. You can clear high levels of Void Mirror easily if you know what you’re doing, but you might sometimes get steamrolled in PvP. Word out on the street is that they’ll be receiving a major buff really soon.

Historically speaking, Dwarves are not that great. They can do a lot of burst damage in a short amount of time, but tend to fall off heavily when combat lasts for longer than expected. Their base defense was recently buffed, so winning with them in PvE and PvP can be done, but you need to have the right heroes and strategies up your sleeve. You’ll unlock them in less than a day’s worth of play, once you get to Knight rank. 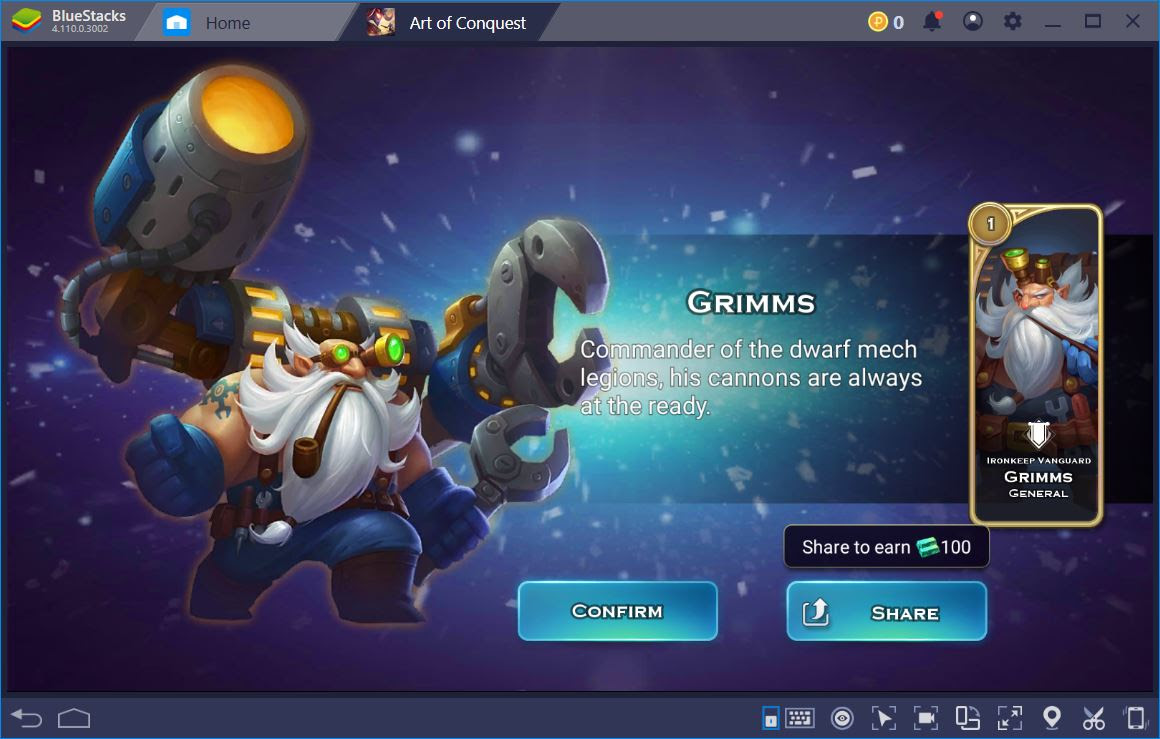 They’re the ones that usually do quite well in PvP since their only weakness seems to be the Rakans. The core mechanic of this race is to overwhelm your enemy with as many soldiers as possible. Mummies can bring new troops and you can also resurrect dead ones from the battlefield to join your ranks, which makes them an alluring choice for many. Veteran players swear by their honor you can pretty much win any PvP matchup if you’re good enough, mainly due to the additional strength of Awakened Scorpions.

Until the recent nerf, Rakan were, by far, the strongest race you could have hoped for. They’re still quite amazing, but they won’t pack the punch they once used to. To be able to take advantage of their benefits, you need to know every other alliance well, so don’t switch over unless you’re a veteran and you absolutely know what you’re doing. They excel at helping others, as their Dragon Turtles are a massive addition to any races’ army, and they are a force to be reckoned with in PvP. 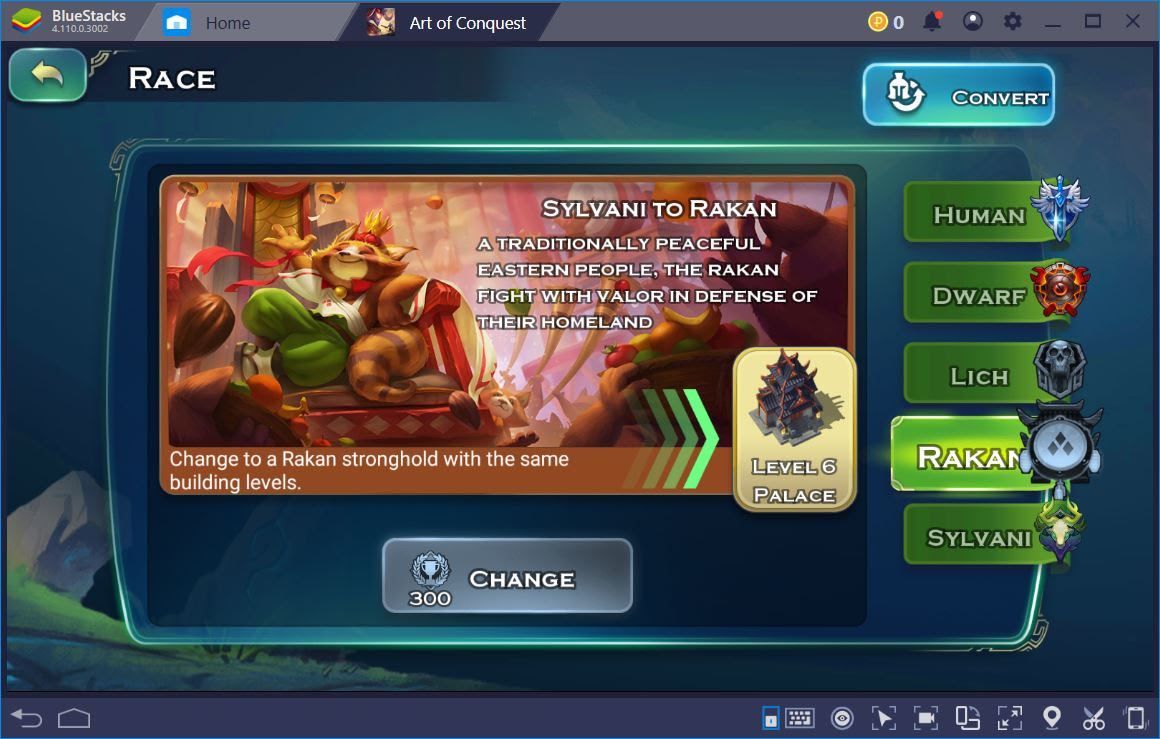 Our current race. Alongside the Rakan, Sylvans are one of the most popular choices right now because many hold the belief they’re the best in the current meta. Riders and Mushroom Lords can deal a lot of damage, while Treant Spirits can take a massive beating. This makes them incredibly useful in both PvE and PvP scenarios, given the right heroes. Hint: go for Gan as soon as possible. He’ll increase the health of all your troops and much more. 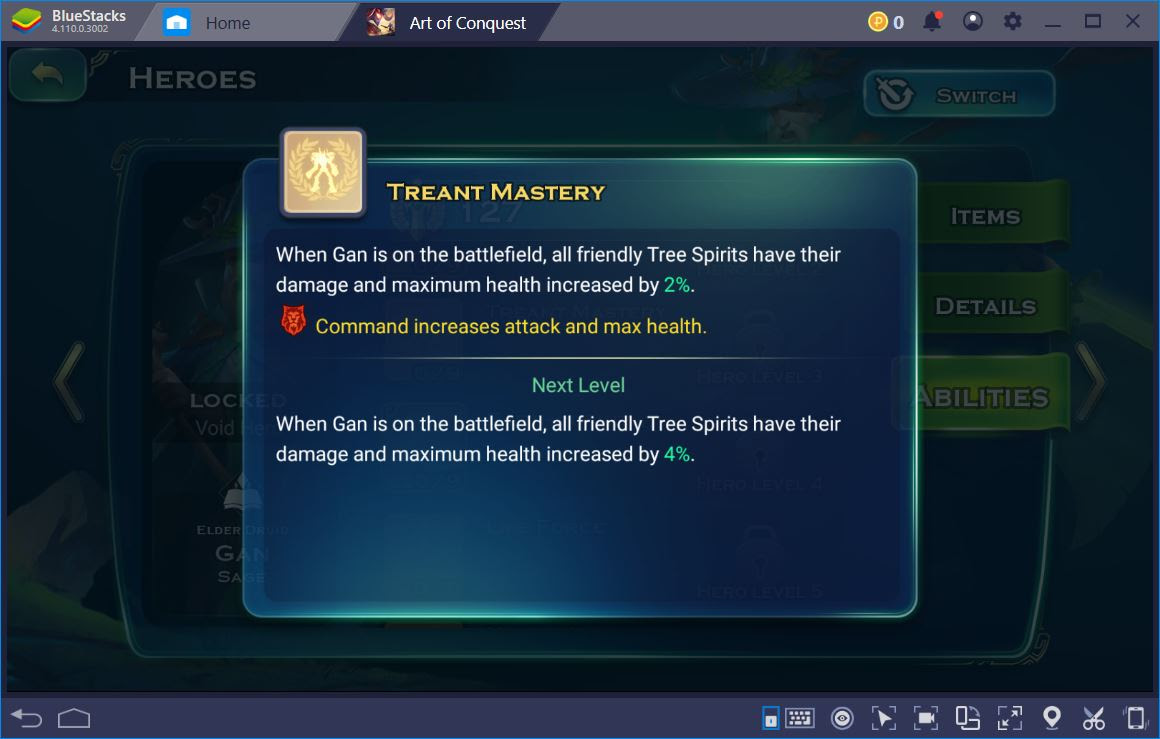 With this in mind, you are now ready to level your heroes and choose the race that fits you best. Although some races were overpowered in the past, the devs made sure to balance them out quite neatly through a series of buffs and nerfs. We greatly appreciate their work, as we are firm believers in being able to play with a faction that you like and still be good.

View all posts by aditya →